Montreal, CANADA – Promens a.s., Berry Bramlage, is a global plastic fabrication company with a very large product portfolio. One of their European divisions needed a robot programming solution that could handle part variety, complexity and process variability, especially with different robot brands for sanding, spraying and trimming processes. Only after an exhaustive study of the major offline programming software packages on the market, did one solution prove its staying power.

One software stood out for its error-free robot path generation, intuitive user interface, and flexibility for multiple processes and easy-to-complex parts. When put to the test, Hypertherm’s Robotmaster offline programming software excels above the rest.

Located in the Czech Republic, Promens’ Zlin facility specializes in reaction injection molding (RIM) and vacuum forming of plastic components for agricultural and construction machinery, mass transit and passenger vehicles. With over 25 years of experience, Promens is the preferred supplier to many OEMs, including Iveco, Rostselmash, Snoeks and Volvo.

After the molding process, large plastic body panels for harvesters, buses and vans are sanded to prepare the surface for painting. Traditionally, the sanding process was manual. But sanding plastic parts is a dusty, arduous and potentially hazardous task. Promens wanted to improve the safety and health of their operators by deploying a robot for sanding.

“Sanding is hard work and not very good for your health,” says Tomas Jurcak, robotics and automation engineer at the Promens Zlin facility. “With very low unemployment in the Czech Republic, it’s also difficult to find enough people to do this kind of job.”

Promens also wanted to ensure consistent high quality, which is difficult with the inherent variability of manual labor. With automation, a robot performs the task the same way every time.

In production for several years, the programming for this special robotic spraying and trimming process had previously been done by a system integrator using Robotmaster offline programming software. In 2017, Promens determined it would be more cost-effective to bring robot programming functions in house and they hired Jurcak to lead the charge.

Jurcak had previously worked for an integrator where he built and programmed robotic cells. Now he was responsible for Promens’ in-house robotics efforts and wanted to make sure he was using the right tool for the job. 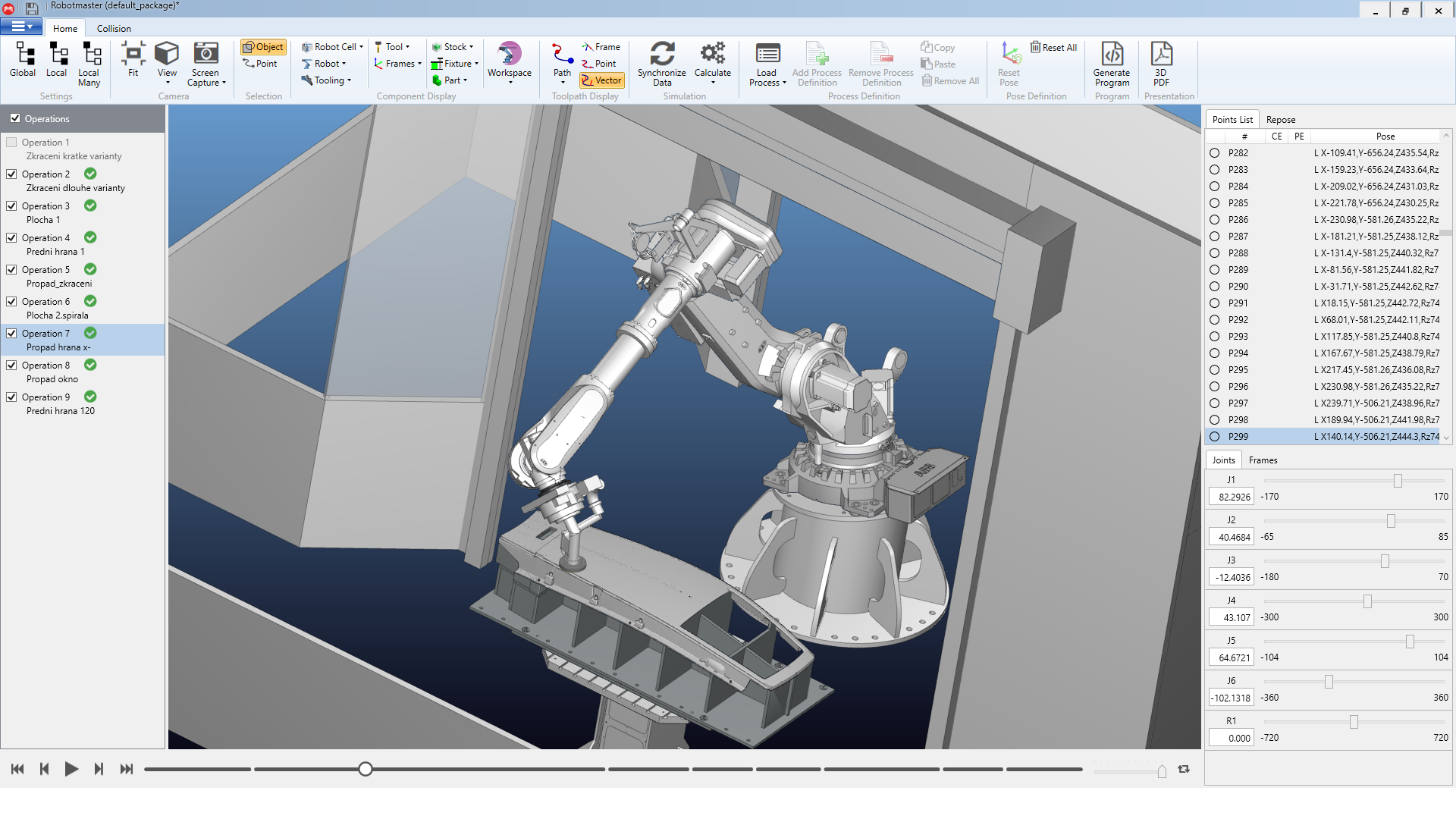 He tested six major offline programming software packages. He spent a week with each one, personally testing the intuitiveness of the user interfaces, and how effectively and efficiently they generated robot paths while detecting errors such as singularities and collisions. Each software was ranked against dozens of parameters, including price.

“Robotmaster excelled in the detection and avoidance of singularities, errors and collisions,” says Jurcak. “The simplicity of path generation is really good. It has simple features for doing complex paths.”

With part complexity, often comes errors. Robotmaster software automatically checks for singularities, reach issues, joint limits and collisions. Then it generates an error-free robot path. Catching and correcting for errors offline maximizes the productivity and profitability of the robot.

“You can generate almost a perfect program for very complex parts,” says Jurcak. “The more complex the part is, the better Robotmaster is. Of the other softwares I tested, only two were almost as powerful as Robotmaster.”

After thoroughly testing the six different software packages and ranking their performance, Jurcak was able to narrow the field to Robotmaster and two other options. He says of those two other software packages, although powerful, one had a poor user interface and stability was subpar. The other was very expensive and demanded excessive amounts of computing power.

Only one software stood out from the rest. The clear choice was Robotmaster. 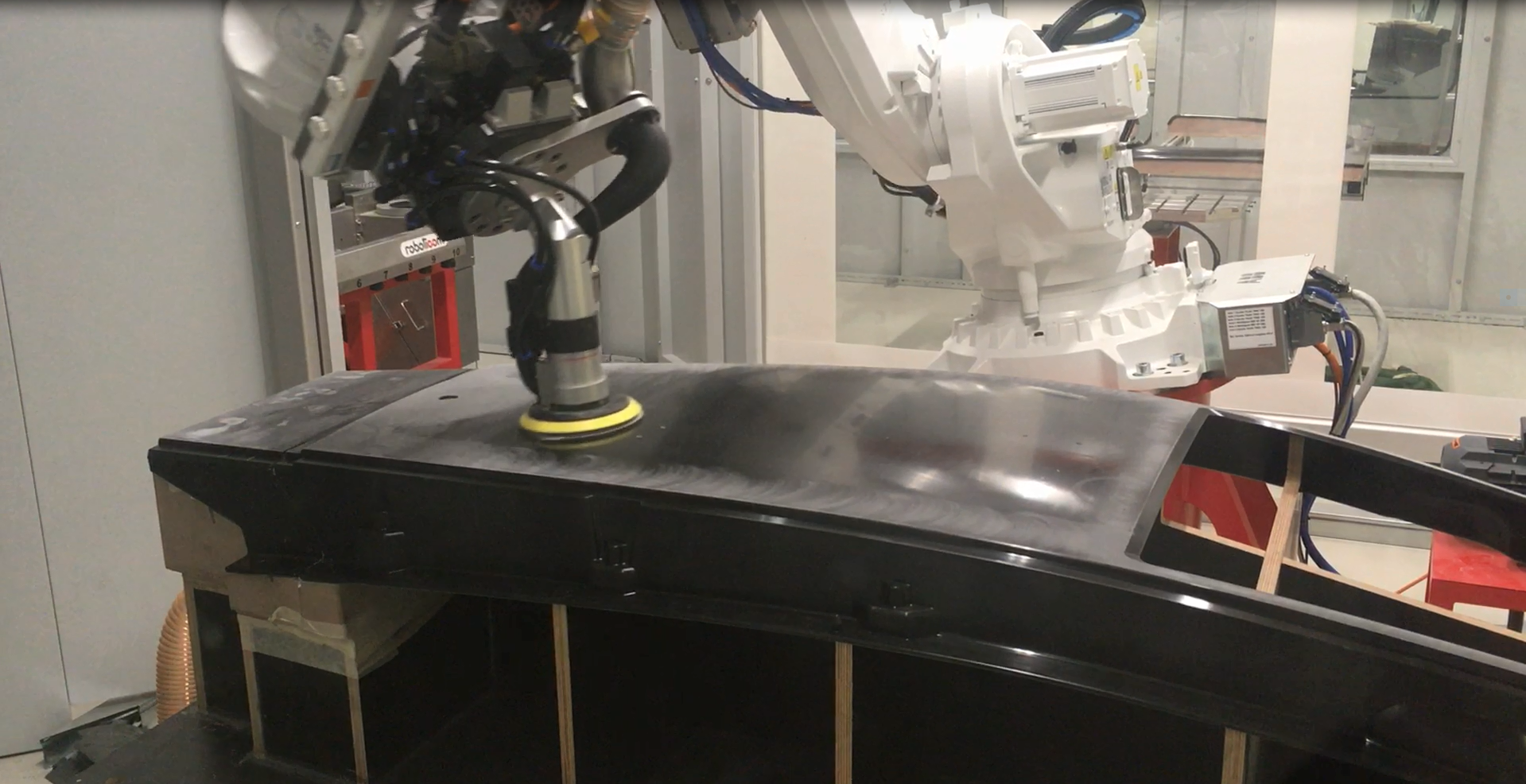 The components Promens fabricates for their customers can run quite large, up to 2.5 meters long, such as this large body panel. A rotary table positions parts for full access during sanding. Jurcak says correct axis configuration and optimization was easy with Robotmaster, and the software controls both indexed and coordinated motion of external axes.

Multiple Processes, One Platform, Any Robot

Having one programming platform for multiple processes allows the user to move a task to any robotic cell. Promens recently launched a new robotic workcell combining sanding and trimming in one cell. Jurcak is programming the new robot with his trusted software partner.

Once again, the clear choice is Robotmaster.