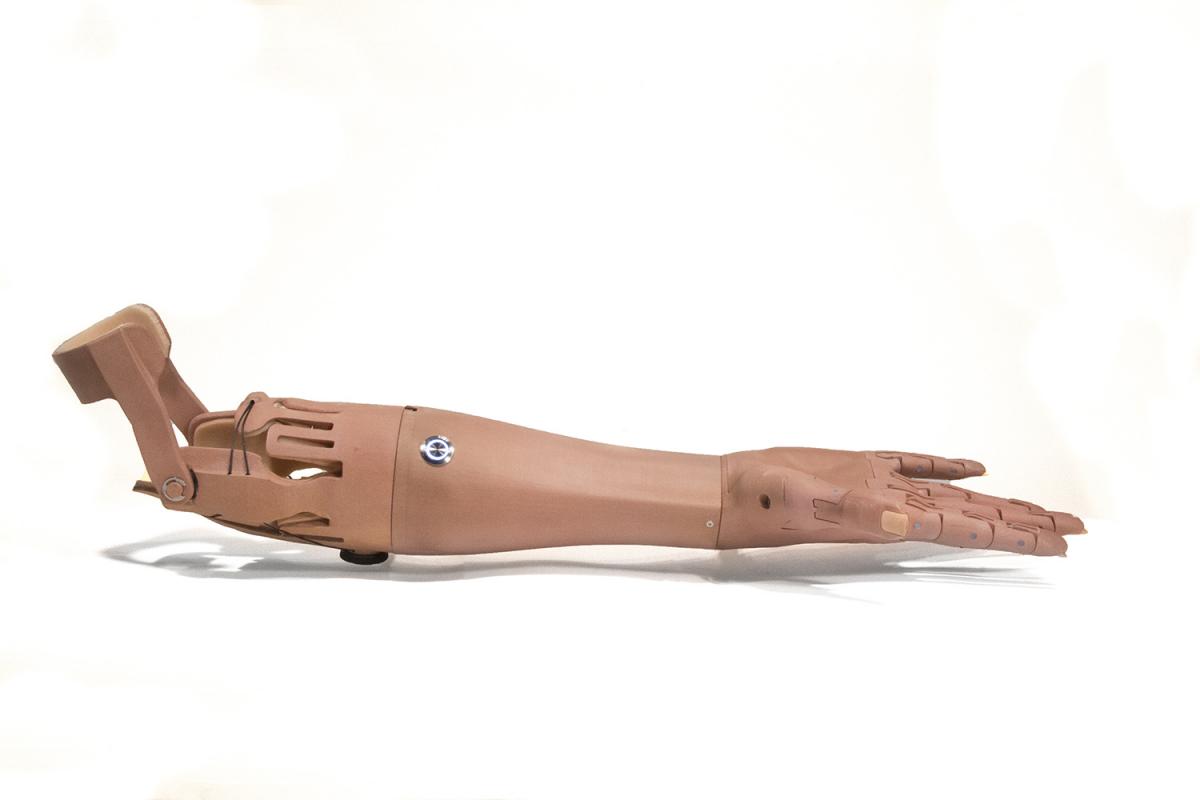 When Easton LaChappelle of Unlimited Tomorrow started working to build his first prosthetic hand, he was still in his teens. Six years later he’s gone from early prototypes to refined product and has a goal to develop robotic prosthetics that can be manufactured in such a way as to lower costs dramatically. Having the right DC motors and gears is, of course, key to his design.

Amputees and those people born without a limb have lacked robotic prosthetic options that are reasonably priced and offer long-term dependable use. Besides the stigmatization people missing a limb often go through because of their differences, children in such positions are faced with the facts that theyaren’t able to do what other children do, don’t look like other children, and may be ridiculed by their peers - with sometimes devastating results.

Typical prosthetic devices for children and adults can run between $30,000 and $100,000. Because children are also growing, this pricing is totally out of reach for many families. In comparison, Unlimited Tomorrow plans to launch their advanced prosthetic hand later this year for about $10,000. The company’s goal is to make their technology affordable and accessible and they’ve introduced groundbreaking emerging technologies to do so. For example, their robotic hand and arm prosthetic structures are manufactured using a 3D Printing process called MultiJet Fusion (MJF) that is able to match skin tone as well as include any personal variations in coloring that may exist, such as freckles or birthmarks. The fingernails are magnetic and can be painted or decorated in a number of ways as well. This is especially important for children who are concerned about looking like and being able to live like their friends and siblings. A scan of an opposing limb, along with other measurements, are taken to generate the socket and device unique to the person -providing a perfect fit for its user without extensive trial and error.

Looks are only part of the story, of course. Functionality and usefulness are critical for a robotic prosthetic to meet the challenges of everyday living. LaChappelle started out with large scale technologies to work out the kinks in his designs and to prove his theories years before coming up with what he’s producing now.

If you can imagine suddenly not having the ability to use one of your hands, you can also imagine what an amputee or someone born without a limb must go through day after day. And once the prosthetic is integrated into a person’s life, a breakdown can become an enormous irritation. This meant that long-life and dependability was essential. This is what the company struggled with while building earlier designs. The motors and gearboxes they chose worked well enough, but because of the stress of everyday use - especially considering the dynamic actions of children - the components would often break down after a few months’ operation.

According to LaChappelle, “We needed to find an electric motor and gearhead that was not only accurate and repeatable, but much more reliable than what we were using at the time.” After researching the possibilities, they decided to incorporate two DC motors designed and manufactured by maxon (Taunton, MA). “Not only did we get a higher quality motor, we also got considerable increases in speed and torque in the same size package.”

Because the maxon DC motors are small, they fit easily inside a child’s robotic hand, which was the test of footprint that mattered. “This also allowed us to use the same motors in the child’s prosthetic as we do in adult prosthetics, reducing the number of components we need to have on hand,” LaChappelle said.

These motors are housed in the palm of the robotic hand along with all the electronics. The motors, with their greater power density and higher speeds and torques, use special haptic sensors as feedback so that the robotic hand’s grip can be precisely controlled.

The maxon products used for the robotic hands are the company’s DCX 12S series of motors and the GPX 12HP series of gearheads. The brushed DC motors operate from battery power for multiple days - batteries recharge using a wireless charging device. The motors can operate at speeds of over 9000 rpm on voltages from 3V to 12V to provide a 1.6W output. Maximum continuous torque outputs are around 1.9 mNm. The motors are designed using precious metals and ball bearings for smooth operation. The GPX 12HP is a planetary gearhead offering quiet operation in a wide variety of reduction ratios depending on the nature of the application.

Precise control of the motion system is done through unique muscle sensors that the company has developed. Muscle data is processed using AI algorithms to decode the user’s intent and then translate this data into hand motions. Haptic feedback is incorporated into the device to allow a sense of touch to be perceived, creating a human-like feedback loop.

16-year-old Charis loves knitting, playing the piano, babysitting, and hanging out with her family. She hasn’t had a prosthesis since she was much younger, when she gave up on her cumbersome myoelectric arm. But the lack of a limb has caused her body to develop some unhealthy habits, balancing to compensate for the length of her arm, which causes pain in her shoulder. With her TrueLimb, she’s ready to experience the benefits of a more aligned body, and do the things others take for granted, like putting her hair up in a ponytail. 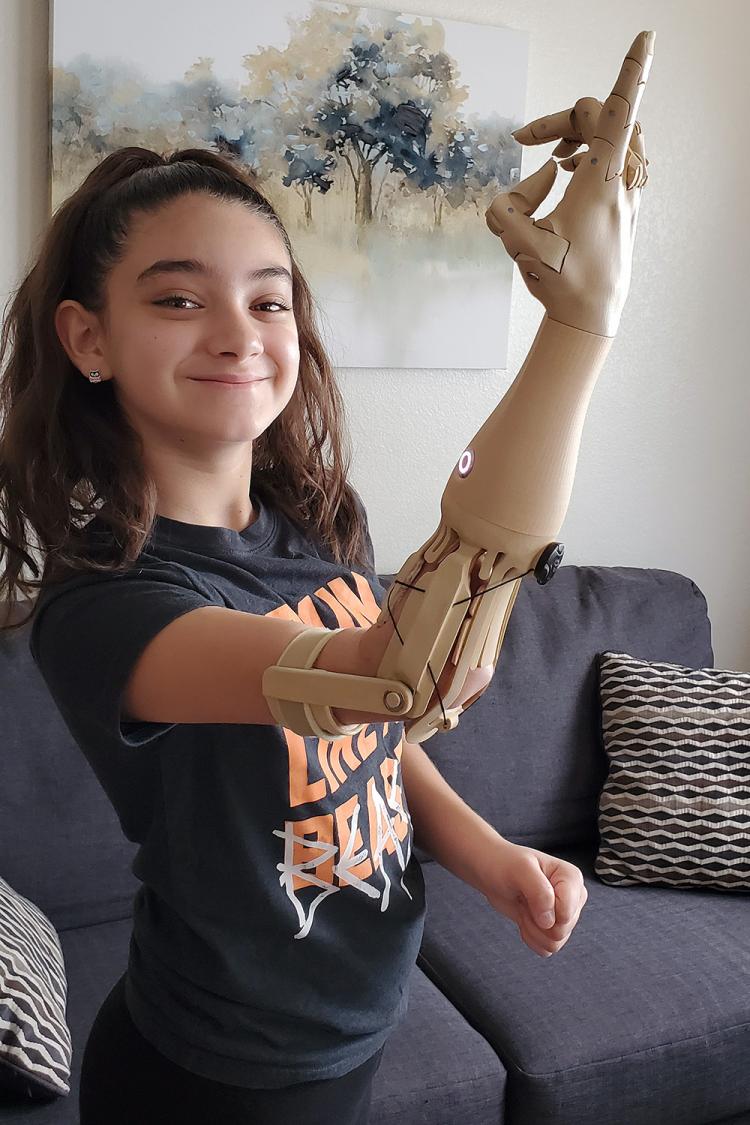 Natasha is an always-smiling nine-year-old who loves to stay active and play games. Born with a limb difference below her right elbow, she had given up on traditional prosthetics due to their weight and the discomfort that came with wearing a harness. But as her new goals of playing the violin and learning Ninja Warrior-style gymnastics took shape, she sought out the advanced capabilities of TrueLimb so her dreams could become a reality.

Helping children is a large part of what Unlimited Tomorrow has been up to. Not only do they focus on aesthetics, they take suggestions from users to refine the prosthetics in ways that make them function better - placing motors in the palm rather than the arm to provide better wrist movement - but to be accepted easier by the user. Since each device is made from a high-resolution digital scan, they fit better than standard prosthetics typically do. The best thing about these robotic prosthetics isn’t their color, their operation, or their long-life, but the smiles on the children and young people using them.