“Cover and Move” is one of the first laws of combat. One member of the team lays down cover fire. This cover fire puts the enemy on the defensive, allowing the other person to move. This tactic is relevant to any team that must maneuver through a challenge.  Put simply, Cover and Move means teamwork.  Jocko Willink and Leif Babin wrote about this in the bestseller “Extreme Ownership: How U.S. Navy SEALs Lead and Win.”  Most of us are not Navy SEALs, but may have employed this tactic in other areas of our lives, such as in a friendly paintball competition.

AMT’s manufacturing team had been contracted to do a fixed-price assembly of robot rails onsite at longtime partner FANUC America’s facility.  It is a complex assembly that requires knowing each manufacturer’s equipment specifications.  There are many steps to building each rail assembly.  Each one must be completed correctly; to go backwards because something was done wrong is costly.

As mentioned, the rails had to be assembled on the FANUC shop floor in Rochester Hills, Michigan, so the team did not have the luxury of executing in the AMT environment.  This creates a higher level of dependency on the customer to achieve success.  The coordination of materials to the build site is the first challenge.  There is an extra, unfamiliar layer of communication to manage for each issue that needs to be addressed.

For Cover and Move to work properly, all team members must work together to accomplish the mission.  Everyone must depend on each other and understand who depends on them.  If they operate independently or against each other, the results can be costly.

Each member of the team is critical and is defined. There is mutual support and communication. The focus is on accomplishing the overall project objective, not the individual tasks.

The AMT manufacturing team is expert in the Cover and Move tactic, which was observed as they assembled the rails.  There are not too many steps in the process that are done independently; many of the steps are in parallel with each other and cannot be accomplished in a traditional assembly-line fashion.  Each member of the team has their own areas of the process that match their individual strengths.

The manufacturing team was originally lined up with a copy of FANUC’s Best Build Practice Guide documentation.  It all seemed overwhelming to the team at first.   "Who is going to do what....and when should it be done?”  They struggled at first, even with the customer’s guidance.

Once the first rail assembly was completed, the team had the target in sight.  The team naturally migrated to their own strengths.  It wasn’t long before the team had designed their own tactic to maneuver through the process and reduce the threats of critical errors.  The team was now moving in concert. 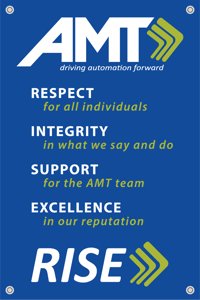 Peter DeCaussin, AMT’s Mechanical Shop Supervisor, was present during the FANUC build. “Smaller sub-assemblies were being built and completed via the Just-in-Time manufacturing methodology which eliminated wait times.  The team’s work preparation and difficult labor processes were quickly adapted to reduce stress and fatigue on the team, which resulted in a reduction of the original assembly time by a whopping 50-60%.”

At AMT, we have spent more than three decades living by our Core Values, one of which is “supporting the team,” which sounds a lot like Cover and Move to me.