Our newest feature — the RoboDK PRM motion planner — allows you to create AI-powered robot trajectories at the touch of a button. But how does it work?

We don’t always have the luxury of a clear, free workspace, do we? That’s true for our own personal workspaces (e.g. my desk is covered in unnecessary items). It’s also true for our robot’s workspace.

Sometimes the robot’s workspace is just smaller than we’d planned it to be. Sometimes there is a huge pillar in the middle of the workspace that we can’t get rid of. Sometimes, there’s a pile of boxes that can’t be stored anywhere else.

Whenever there’s a chance your robot might collide with something in the workspace, our new motion planner is here to make your life easier.

With the touch of a button, it can create a collision-free path for your robot program.

This article provides an introduction to PRM motion planning and explains when you should use this new feature.

What Does PRM Mean?

The new RoboDK motion planner uses an algorithm called “PRM” which stands for “Probabilistic Roadmap.” It is a very common type of motion planner, for reasons we’ll get into in a moment.

There are a bunch of different motion planning algorithms available for robotics, ranging in complexity from pretty basic to extremely elaborate. If you’re not familiar with motion planners at all, check out our previous article Back to Basics: Robot Motion Planning Made Easy

From these two terms, we can say the following about a PRM motion planner:

These are two reasons why PRM planners are popular.

Unlike some motion planners, PRM algorithms split their work into 2 separate phases. Before using the planner in RoboDK, you have to set a few properties.

There are 3 properties that you set up manually before running the planner. 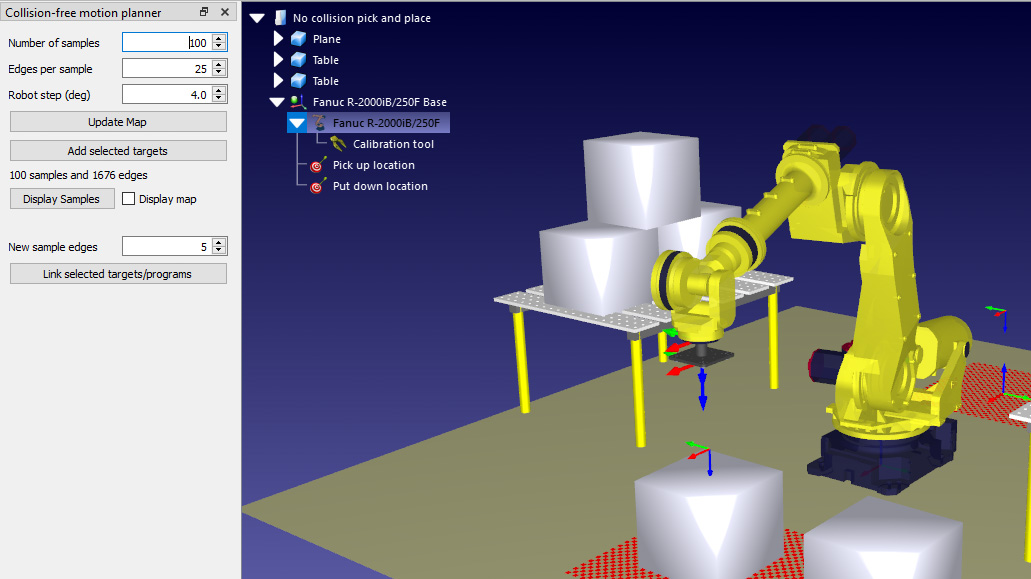 This is how you set these properties in RoboDK (and what they mean):

You then click “Update Map” to start the construction phase.

The first phase of planning is to generate a roadmap. This can take a long time (roughly 15-30 minutes for 100 samples with 25 edges per sample).

This is how the construction phase works “under the hood”:

You can see why this phase takes a long time — the algorithm has a lot of samples to test. Thankfully, once the map is created, you don’t need to calculate it again (unless you add new objects to the environment).

The query phase is the part of motion planning that you will use most often. You provide the planner with two targets (a start target and an end target). The planner then tries to create a collision-free trajectory between them using its stored roadmap.

This is how this phase works “under the hood”

With a sufficiently detailed roadmap, this allows you to create complex, collision-free robot movements in seconds at the touch of a button.

When Should I Use the Motion Planner?

The standard way to program a motion into RoboDK is to manually plan the moves yourself using either Joint Moves, Linear Moves or Circular Moves. This is still the fastest way to program the robot to move between two targets.

However, these standard commands only work when there is free space between the two targets. If there are objects in the way, you may have to spend a lot of time creating intermediate targets to avoid the collisions.

The motion planner provides a way to automate this process. It automatically finds the best set of motions to move the robot between targets with no collisions.

But, there is a trade off. You have to wait a long time for the construction phase to finish before the planner can start finding paths for you.

Most of the time, this long wait is not a problem. You just have to “set it and forget it.” Let the construction phase run while you do something else.

Check out the documentation for more details on how to get started.