In search of signs of life on Mars 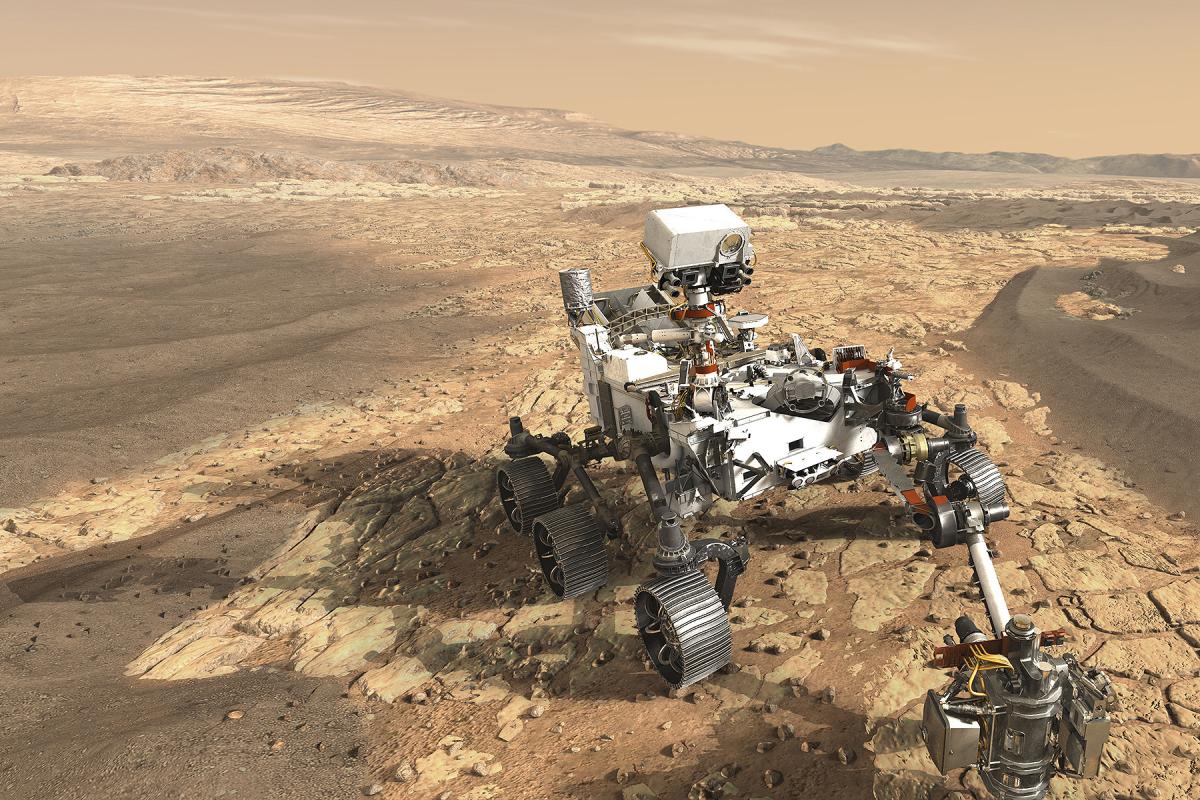 Mars once had liquid water and an atmosphere—was there life too? To answer this fundamental question, NASA sends the Perseverance rover, a robot of unparalleled complexity.

Mars missions may seem to be routine now, yet it’s still the case that only a few craft make it to the planet’s surface intact. The European Space Agency (ESA) had a painful demonstration of that in 2016 when their lander Schiaparelli smashed into pieces on the Red Planet. Nevertheless, US space agency NASA has so far taken four robotic vehicles to Mars successfully. It is now looking to make history again with the Perseverance rover in February 2021. For the first time, we on Earth will see live images of a Mars landing, supplied by high-resolution video cameras. We will feel as if we ourselves are landing on our neighboring planet.

It will still take a while, however, before people land on Mars. This is why robots need to do the work for now, and Perseverance has quite a lot of it in store. It will land in the Jezero Crater, which was once filled with water, with the task of investigating whether the area was once habitable. At the same time, the rover will search for signs of earlier life, known as biosignatures. It is equipped with a variety of measuring instruments for this purpose.

Its third task is to pave the way for human missions with a technology demonstration: An instrument named MOXIE will extract oxygen from the small amount present in the Martian atmosphere. This technology would be crucial for human missions, as oxygen is not only required for breathing, but can also be used for making fuel.

The secret of life

We now come to the fourth mission, the most spectacular and most technically demanding: Perseverance will take up to 30 soil samples, place them in individual vessels, seal the vessels, and then finally deposit them at a suitable location so a later mission can collect the samples and bring them back to Earth. For scientists, it doesn’t get much better than this: getting clean samples from Mars and being able to investigate them here, with all the latest techniques available. As NASA puts it, these samples have the potential to tell us more about the basis and origin of life in our solar system.

Three systems have to work together seamlessly for the sampling to succeed. First, the big robotic arm at the front of the rover drills into the Martian rock and takes a core sample, which is then inserted into a carousel. The carousel takes the sample inside the rover. There, the third system takes over. It is another robotic arm, a much smaller one called SHA. This arm takes the sample from the carousel, moves it to the volume assessment and scanning stations, then to the sealing station, and finally into temporary storage—all autonomously.

This is where maxon comes in. Several BLDC motors are being used to handle the samples. Some of them are installed in the SHA robotic arm, which transports the samples from station to station; others are used when sealing the sample tubes and positioning them.

The key to success is still the same

Just like the more than 100 maxon drives that have previously done work on Mars, the Perseverance motors are based on standard catalog products: specifically, nine brushless DC motors of the EC 32 flat type and one of the EC 20 flat type, in combination with a GP 22 UP planetary gearhead. Naturally, modifications were required so that the drives could meet the high demands of the mission. Nevertheless, the basis of the drives is no different from the models that are used in all kinds of applications on Earth.

maxon’s engineers have modified and repeatedly tested the motors and gearheads for three years, working closely with the specialists at the Jet Propulsion Laboratory (JPL), which handles all unmanned missions for NASA. The space experts from Pasadena were frequent visitors at the Swiss headquarters of the electric motor experts. “We’ve learned a lot from this collaboration,” said Robin Phillips, head of the maxon SpaceLab. This can be seen specifically in higher quality standards and new test procedures and processes. “Customers from other industries, like the medical sector, where requirements are often similar, also benefit from this know-how.”

Phillips and his team will pay close attention to the landing of the Perseverance rover and its activities, as much will depend on the functioning of the maxon drives. In his words, “We are involved in absolutely critical applications. If the robotic arm on which our BLDC motors are mounted doesn’t move, or if the gripper doesn’t work, then the entire mission will be a failure.”

Perseverance will search for signs of earlier life (biosignatures) on Mars, take rock and soil samples, and prepare them for return to Earth.  It will also conduct experiments to pave the way for human missions.