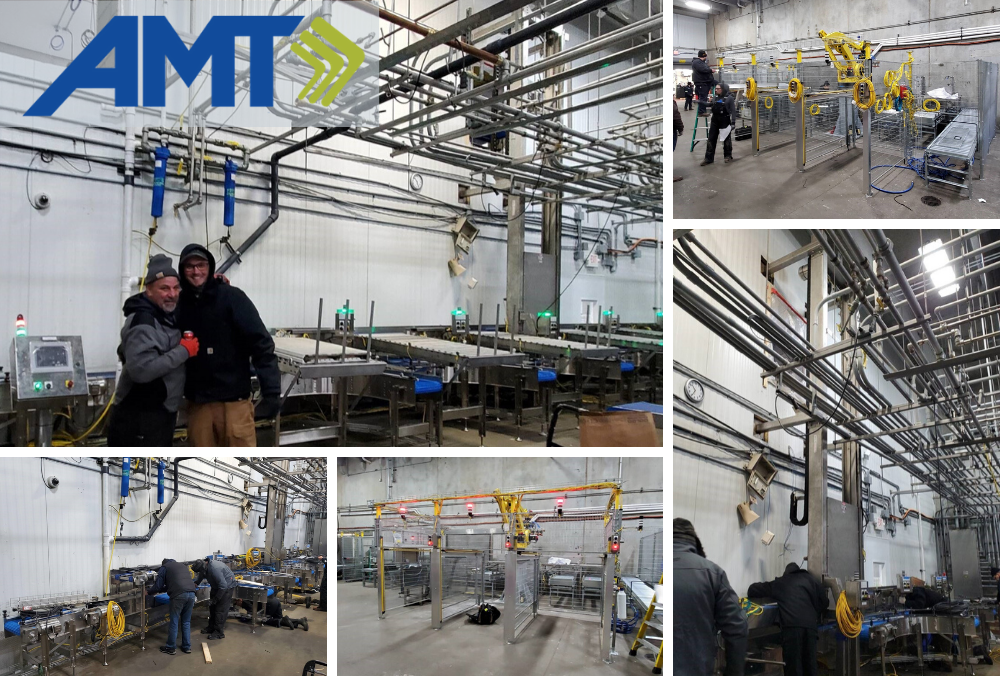 On a recent time-critical installation, teamwork and creative problem-solving skills prevailed as AMT engineers overcame unforeseeable obstacles to get equipment back online ahead of schedule during a major material handling project for a food manufacturer.

Despite the most meticulously planned out installation schedule, unforeseeable obstacles and delays can occur.  AMT’s Senior Program Manager John Brock describes the challenges that were overcome on a recent two-phase major system upgrade in a food processing plant.

AMT was contracted to upgrade conveyors and peripherals in the production and pack-out areas of a food production facility.  John Brock and his team of automation professionals meticulously planned the installation schedule for two consecutive weekends, with full production running between.  “We planned like crazy since we knew we had such a small installation window.  We planned hour by hour, and by the half-hour in some cases.”

Production was running two shifts, six days a week plus the cleaning shift, so the AMT team planned the schedule around strict installation start and end times.  Missing the end time for the installation was not an option; it would have been very costly due to lost product revenue and production employees being paid not to work.

WORK BEGINS, BUT NOT ON TIME

“We pitched in on their scope of work,” said Brock. “We helped with demolition, which got the old equipment out of the way.  It was unexpected, so we had to figure out how to get things done on the fly.  We worked incredibly long hours, like 20-hour shifts, to get this back on track.”

One of the key components of the design was a new material handling elevator.  The elevator was tall and difficult to install, and had been subcontracted to a conveyor supplier.  “The elevator was very long - 20 feet tall, and awkward to handle,” said Brock.  “To maneuver it into the proper position, the elevator had to be lifted in a three-foot-wide space, like a skinny hallway.  The subcontractor could not use a fork truck or a lift, so we had to get creative.”  This issue brought the entire process to a standstill and caused a lengthy delay.

To solve the problem, the AMT team designed a lever-and-pulley system, attached the elevator to a temporary overhead I-beam, and lifted it with a come-along winch.  “We did not foresee that the conveyor supplier didn’t have a handle on how to get the elevator into place,” said Brock.  “The technical solution was us experimenting with the lift points.

DELIVERY OF EQUIPMENT OUT OF ORDER

Due to the very limited staging area in the plant, the arrival of the new equipment had to be carefully planned out.  “There was limited open floor space in the plant and the installation area was so tight that we had to take equipment in and out in order, with no room for work in progress.”

With only one dock space available to AMT during installation, it was critical that the materials arrived in order.  AMT engineers packed the trucks to that direction as well.  “We coordinated the trucks to have the correct pieces of equipment and supply of parts, which was all orchestrated to the order of installation tasks.  We had painstakingly planned the equipment delivery trucks to arrive in order, which they did not,” said Brock.  “We did some last-minute communications with dispatchers and got that straightened out.”  Trucks that arrived out of order had to be routed to an offsite area where they could park and wait. This was not an easy task in downtown Detroit, but was necessary in order to allow the correct truck access to the dock area.

GAINING TIME AT THE MIDPOINT OF THE INSTALLATION

Before equipment leaves the AMT facility for installation at a customer’s site, it undergoes rigorous factory acceptance testing (FAT) procedures.  The controls team utilizes comprehensive system checklists that are designed to uncover any potential startup issues so they can be addressed before the equipment leaves AMT.

At the end of the first installation weekend, the new conveyors were connected to the existing production equipment, which posed a challenge for the installation team. “Given the tight time restrictions and the nature of joining new conveyor sections to existing equipment, there were alignment concerns when we ran the conveyance line all the way through,” said Brock. “Where it was off, we were able to fine-tune the position, and it came out well.”

“Because the controls team had done a great job with the run-off at the AMT facility, the debug phase went faster than planned.  The installation went smoothly, and we actually got done faster than expected.”  At the end of the first weekend, the AMT team powered up the new equipment and was done ahead of schedule so that production could resume as planned the next morning.

During the second installation window, the tasks were to remove old gantry robots and install conveyors and robotic palletizers.  In many ways, this installation mirrored the previous weekend.  Once again, the customer was late in yielding the floor, and again the AMT team pitched in to get the work done before starting the installation.

Although there were many unforeseen obstacles, there were also a few positive developments.  “The management team – everyone – Rick Vanden Boom, Craig Salvalaggio, Mark McGinnis… they all came in to help.  They brought meals so that the guys could have a shorter break and be efficient with their time,” said Brock.  “This kept our momentum going.”

“Managers came in with food and then jumped in to help as part of the mechanical team,” said Brock.  “Mark was helping pull cables, and Terry Meister was working as well.  It helped tremendously that everyone was working so hard, and the management team was enormously supportive.  Craig talked to the customer so I could work with the guys doing the mechanical installation.”

There was one final challenge for the team to overcome and again the AMT management did not hesitate to do what they could to help.  “The test boxes we were using to run-off the machine ended up being taped up more than we wanted, and would have caused issues with the sensors,” said Brock.  “We quickly decided that instead of building all new boxes, we would remove the tape in areas of concern.  Craig jumped right in and helped the team remove the tape to help us more quickly test the system for final runoff.”

Despite the unforeseen challenges, the AMT team finished the installation ahead of schedule with hard work, long hours, teamwork and a healthy dose of ingenuity. Brock summarizes the experience, “We had a tight timeline, many unforeseeable obstacles to recover from, and had to figure out how to get back on schedule.  All the little things each team member, including management, did to ‘do whatever it takes to get the job done’ is how we are successful.”

The customer was thrilled with the outcome.  AMT successfully navigated strict downtime windows, limited space, and technical challenges to get the new equipment up and running ahead of schedule.