QING, an engineering firm based in the Netherlands, helps companies meet their growth objectives of higher output and quality while at the same time achieving cost reduction, sustainability, efficiency, and flexibility. To accomplish this, QING helps businesses realize digital transformation, adapt to industry 4.0, and implement a smart industry environment.

In this case study, we’ll examine how QING used 3D manufacturing simulation to set up a fully functional face mask factory in the Netherlands within just a few weeks to meet the high demand for face masks during the COVID-19 pandemic.

A critical shortage of face masks

In March 2020, the COVID-19 pandemic was spreading rapidly throughout Europe. During this time, there was an increased global demand for personal protective equipment—or PPE—and a critical need for face masks.

As a result of setbacks in global production and logistics, the Netherlands faced the same challenges with obtaining PPE as everywhere else. However, the shortage was exacerbated due to the fact that there was no local production of face masks in the country.

In this environment, four entrepreneurs decided to establish MondMaskerFabriek, the first face mask production facility in the Netherlands, to meet the high demand for this type of PPE. They envisioned creating a workforce that consisted mainly of individuals with refugee status in order to help them integrate into Dutch society and build a professional network.

However, their initiative was complicated by the fact that to protect their workers against the coronavirus, their factory would have to implement social distancing measures—to keep six feet of distance between workers—at all times.

Around April 20th, MondMaskerFabriek contracted QING to help them commission two production machines from China, as well as to quickly design and execute a facility that not only made optimal use of the company’s investment, but also provided a safe and healthy work environment for the workers.

QING used Visual Component’s 3D manufacturing simulation software to design the layout that included manual assembly workstations for stitching and packaging, as well as to perform the throughput analysis.

“Using Visual Components gives us a big advantage in the development of new automation or processes,” said Bram de Vrught, Business Manager at QING. “We use it in almost every project to create insights, make important decisions, and provide valuable substantiation to our clients.”

The first mask was produced on April 27th, which was King’s Day, a national holiday in the Netherlands. Interestingly, QING had been founded exactly seven years earlier, on King’s Day in 2013.

Over the next weeks, QING and MondMaskerFabriek worked together on the simulation to discuss the machine locations and finalize the layouts. Once the layouts were agreed upon, the team validated their designs to check the statistics of resource utilization and determine how to optimize certain processes to achieve maximum productivity. Using the layout as a blueprint for the logistics and training of the operators, they also used statistics to check the travelling distance per day of each worker, as well as their output. They measured every stitch and monitored continuously to ensure every worker was fully utilized.

In the first stage of the factory setup, there were two production lines that each had an automated face mask production machine where the raw face masks were produced. The elastic ear straps were attached with a welding or stitching at one of the manual workstations. Next, the masks were transported to the manual packaging bench where they were bundled and stacked inside boxes. The boxes were then packed and prepared for shipping.

During this stage, the QING team used simulation to check routing. In addition, to maintain a safe and healthy workplace, QING developed a feature in Visual Components that calculated the distance between workers and triggered an alert any time the social distance of six feet—or 1.5 meters—was compromised. 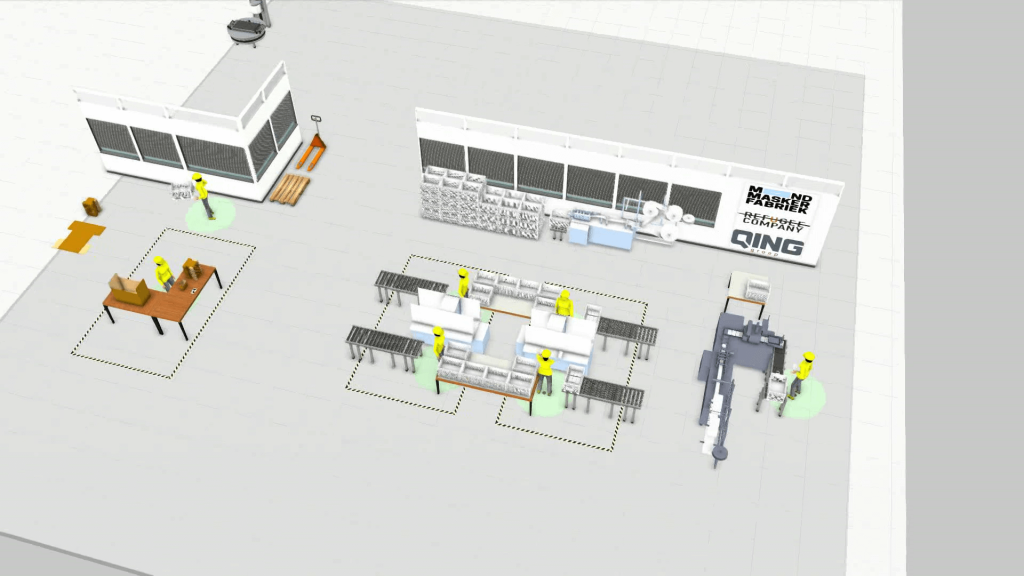 In July, the demand for the masks increased, so the team embarked on the second stage of the factory setup. The facility was expanded with two more production machines to meet the ongoing high demand. Because this resulted in almost fully utilized floor space, the production lines were adjusted to each have one face mask production machine followed by one manual workbench for ear strap welding. The number of packaging stations was increased because the packing process was adapted so that every mask was first sealed in a plastic bag before being stacked in a bundle of 10 and placed in one small box that, together with other small boxes, was then packed into a carton for shipping.

During this stage, more workers were added, so the team used the newly developed distancing tool in Visual Components to ensure safe routing. In addition, they used simulations to make sure all resources were being optimally utilized.

The next step will involve further automating the process to optimize the number of manual processes being performed. In addition, the team is considering several different options for growth. “At this point, we’re focusing on increasing production capacity,” said de Vrught. “This is mainly based on the PDCA method. Since MondMaskerFabriek is quite ambitious, further production expansion in the form of more locations could be on the horizon. When setting up more facilities, simulation will again be a very valuable tool to use in the decision making process.”

By using simulation technology during the design of the layout, QING was able to optimize MondMaskerFabriek’s high initial investments related to layout planning and installation. This helped considerably with troubleshooting, redesigning plans, and minimizing downtime.

Thanks to QING’s foresight regarding using simulation technology, the team was able to get the factory up and running within a very short period of time and almost doubled production after just two months. As such, this initiative is an outstanding example of the rapid scaling up of production with the use of simulation technology

QING Groep, headquartered in Arnhem, the Netherlands, is an engineering development firm that was founded in 2013. The company specializes in factory automation and digitization. In addition, it helps its customers adopt the latest technologies in production management in order to scale up or expand their businesses while keeping their productivity at optimum levels.

Located in Arnhem, the Netherlands, MondMaskerFabriek is the first Dutch surgical mask factory. It was founded by four entrepreneurs in March 2020 to address the high demand for face masks during the COVID-19 pandemic. Visit MondMaskerFabriek for more information.